A downloadable tool for Windows

This tool was originally made to download the top ranked Beat Saber songs, but was updated to allow for more categories and an option for all songs or just ranked songs. Just give the program your Beat Saber path, specify a sort category, and give it a number to download, and it'll go through the results from the ScoreSaber API and download the songs from it.

The tool is free, but I've enabled donations. Just click "no thanks, take me to the downloads" after clicking "download" if you aren't interested in donating.

Please let me know if you find any issues! :D

This is NOT a mod. It's an tool that you run outside of BeatSaber to automate the downloading of songs.

I'd recommend keeping the tool off your desktop as it generates a ton of temporary files (it'll delete them).

As of November 19th, 2021, the tool is functional again. The BeatSaver ownership got transferred and the tool was unbanned.

Guess this stuff is still down

Hi, Is this took still being blocked?

The ownership of BeatSaver just transferred, so I may be able to get it unblocked. The old owners didn't like me.

Hi there downloaded your app to use for my quest 2, set up folders on the pc and when the app tries to download songs i get

Is the app now broken or have i missed something.

It says in the description that Beat Saver is blocking requests. I’m working on a fix.

I was previously waiting for a response from the Beat Saver devs, but I never got one, so I just released the working build today.

Should be working now.

See the devlog for more info.

EDIT: I've taken down the downloads because they appear to have banned my user agent. This was likely a mistake (I've had similar issues with ScoreSaber in the past).

Great tool! Used it to download 250 of the trending ranked maps, it puts them right into the Beat Saber folder and lets you make a playlist for the added songs, very useful thank you!

Hey there, i like that tool! Could there be a way to select the difficulty of songs being downloaded? For example only download songs ranked from 15-25 stars?

I wanted tha, too. So I started developing ARBSMapDo, a tool that can do exactly that. Including some more advanced filtering options of that kind:

Cool! Going to take a look at it. Thanks for sharing! :)

Great program, I've been recommending it to people in the Discord.

Just delete the save_dir file and run the tool again. It'll ask you to specify the Beat Saber directory again.

I don't think the ScoreSaber API (the interface with ScoreSaber itself) allows for those types of requests. All of the sorting options in the tool are what the ScoreSaber API allows me to do. You could download every ranked song by getting the total and entering that. The ScoreSaber API is missing documentation (or I can't find it) and I don't have a good way to find the total number of ranked songs using scripts. If I could, I could just make it work backwards from there.

Thanks for the reply, hopefully they change that soon cause my song collection is getting pretty big! 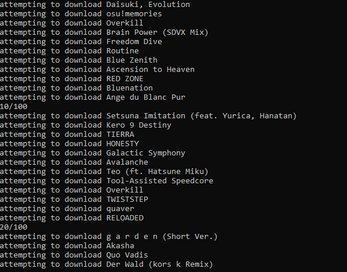